Thank you for using Our Kids. The Trusted Source for Families since 1998.

By: Brigs Youth Sail Training   view all programs and sessions

Sailing on the TS Playfair with BRIGS is an experience like no other. From the moment you step onboard, you are a member of the crew. An active and thrilling experience from day one, from hauling on the lines, to steering the ship, you are vital. Onboard, you will learn that teamwork is an essential part of life, as every effort onboard the TS Playfair is a team effort.

A normal day onboard is more than just sailing! Activities during your voyage will include swimming, singing, campfires, and exploring ports and anchorages throughout Ontario

By the end of the voyage, you will know the fundamentals of how to sail a Tall Ship and be certified as a BRIGS "lead hand'.

Step up to the challenge and join our crew!

Get to the Point

Lake Erie is home to two famous ‘points’, the marine term for an extended peninsula of land. On this voyage you’ll see them both: Long Point and Point Pelee. Leaving from Port Colborne, we'll head west crossing the entire length of Lake Erie. We’ll break up the journey with a stop at Pelee Island and wave at Middle Island, the Southernmost piece of land in Canada before heading up the Detroit River to Windsor.

Setting sail from Sarnia, we pass under the Blue Water Bridge - so named because it describes the beautiful expanse that opens up before us. As we head North towards Manitoulin Island the magnitude of Lake Huron becomes evident. This is one of the few places in the world where you can be surrounded by fresh water and not see land in any direction!

Departing from historic Goderich, we sail north over the Bruce Peninsula to enter Georgian Bay. As we round the peninsula, we’ll have the opportunity to explore some of the North Channel’s many secluded bays and inlets, where some of the best hikes and campfires of the summer are found. Next, we’ll set sail to make our way south down Georgian bay, stopping in at a few ports along the coast, before finally arriving in beautiful Parry Sound.

After leaving Parry Sound, we’ll find ourselves in the southern end of the 30, 000 Islands that form the world's largest freshwater archipelago. Get ready for stargazing as you leave all the light pollution of the city behind and experience the tranquility of a ship on the open water at night. With the 30,000 islands as our backdrop, we’ll sail south, stopping to explore anchorages along the way. Passing the famous island’s of Beausoleil, Giant’s tomb and Christian Island, we’ll enter Nottawasaga bay to reach our destination in Collingwood.

Back Over The Bruce

As Playfair begins the return journey to her home in Lake Ontario, we’ll depart Collingwood and head north along the east coast of the Bruce Peninsula. At the top of the peninsula, we’ll make our way through Fathom 5 Marine Park, giving us a great view of ancient rock formations called “Flowerpots”, before altering our course south as we enter Lake Huron. After a couple days of sailing, we’ll arrive at the sheltered harbour and sandy beaches of Kincardine.

In the final weeks of the summer, we’ll enjoy some last days of sailing on the open waters of Lake Huron. Leaving from Kincardine, we’ll set sail to head south towards the mouth of the St. Clair river. After a week out on the water, with a few stops at ports along the eastern coast, we’ll reach our destination in Sarnia, just beyond the Bluewater Bridge. 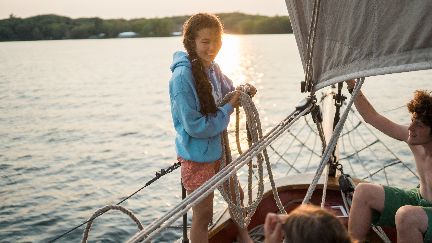 Join the crew of the TS Playfair for an exiting 5-10 days of leadership, teambuilding, and an adventure of a lifetime.

Thank you for using Our Kids. The Trusted Source for Families since 1998.

Thank you for your interest in Brigs Youth Sail Training . They will send you information about this session:

Go back to profile
×